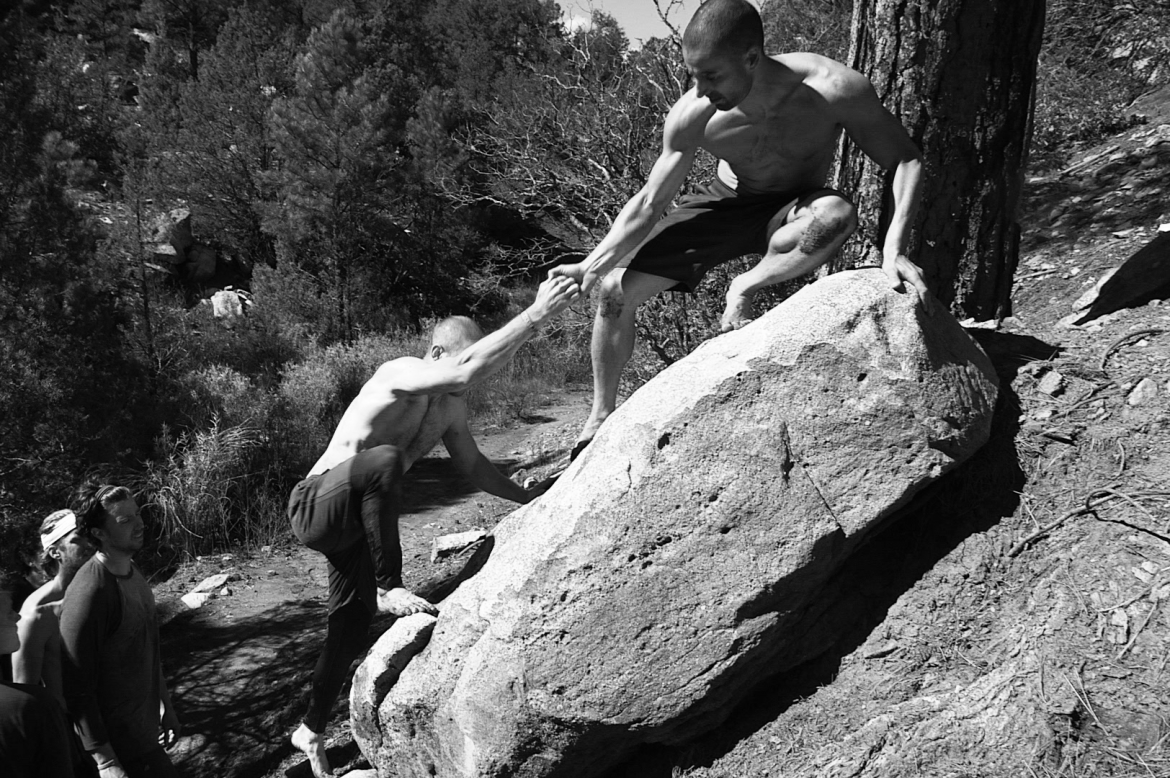 This past weekend 15 candidates from around the world (Canada, South Africa, China, Taiwan, Europe and the U.S) came together for MovNat’s annual level 3 certification course. This year it was held in the mountains of New Mexico, led by Erwan and Danny and supported by 8 MovNat Team Instructors including myself. It was a 3-day experience that reminded me why I chose to teach MovNat and become a trailblazer for women in our community. As a supporter, encourager, and observer I witnessed the certification course from a unique perspective and I left feeling inspired and hopeful for humanity and nature. 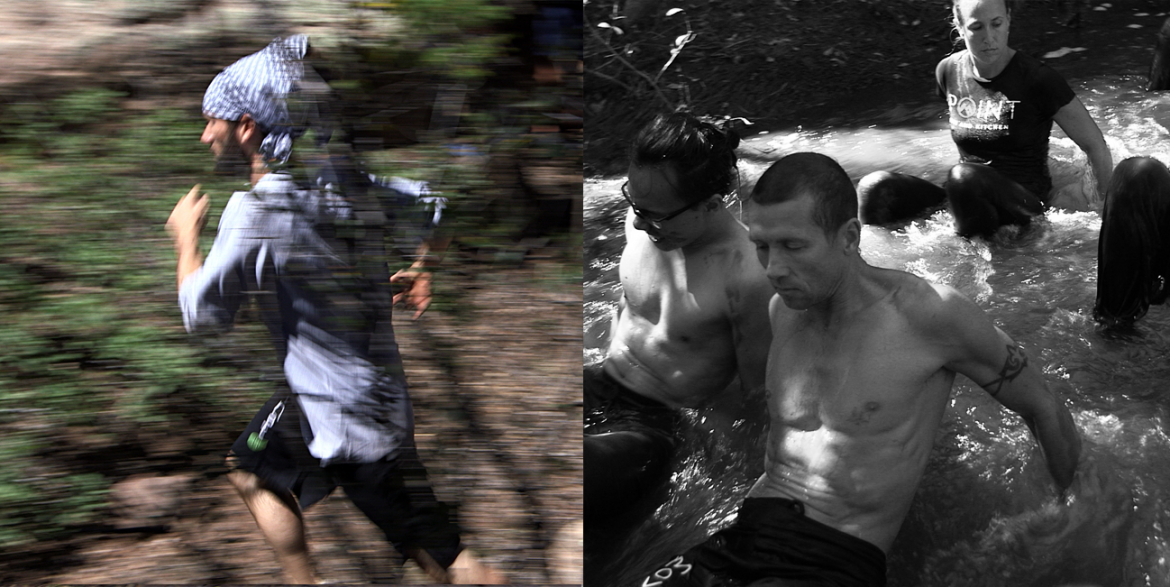 The certification was held at Glorieta Camps in the breathtaking southern Rockies of New Mexico and was 100% outdoors. The group would show up at 8am with dew still on the grass and ominous clouds in the sky ready to release their rain at any moment. Everyone was cold, wet, and still acclimating to the thin air at 7,000 ft elevation. The candidates had to adapt to a challenging assortment of environmental complexities movement competencies that I had never heard of or experienced at any other certification course.

One of the tests was a barefoot run in the mountains after practicing a full day’s worth of level 3 skills which included climbing, jumping, and dive rolling. Erwan led the pack of determined humans up the side of mountain in the rain. The rain eventually turned into a severe thunderstorm with hail the size of acorns pelting our drenched, sweaty bodies. We completed the run together, soaked in rain, pride, and humility from the power of Mother Nature. 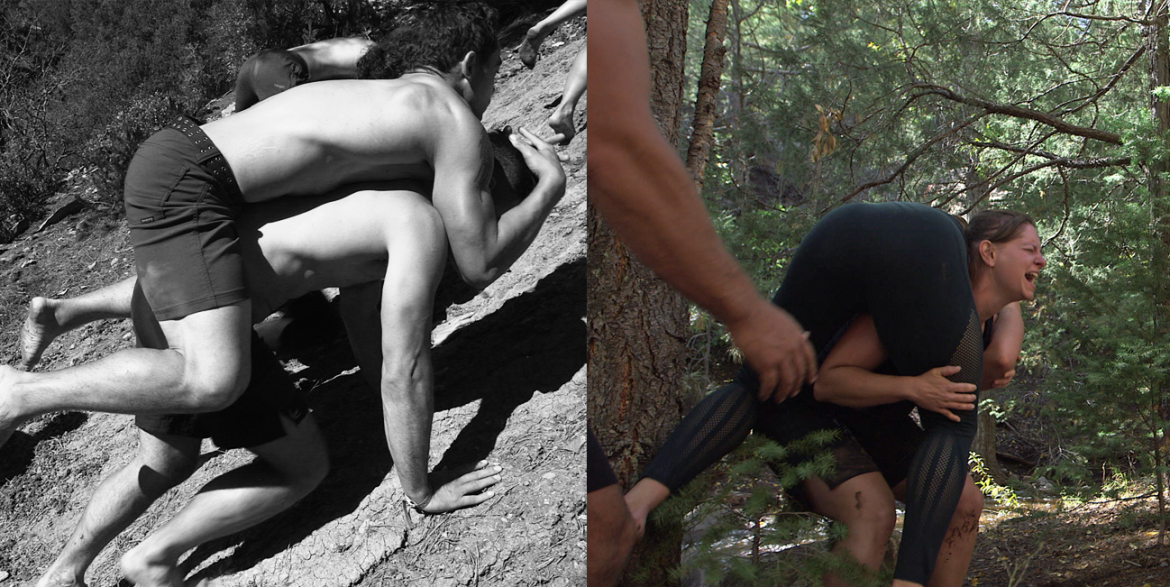 With unexpected weather and the uncontrollable wildness of nature, the participants demonstrated the true meaning of adaptability. Some of these movers had largely trained in controlled environments with perfectly engineered training tools. Some lived in more urban environments and rarely moved on the Earth barefoot. Yet they exemplified their ability to dive deep into their natural movement skillset they earned at previous levels of certification and adapt to new and uncharted terrain with competency and confidence.

Here’s the thing that stood out above all: MovNat level 3 isn’t just about difficult or flashy movements. It’s about the development of mental fortitude, a celebration of what the human body is capable of, and a humbling self-exploration of movement competency. If you embody the mental processes that forge true movement competency the level 3 movements are absolutely achievable. And that is exactly what MovNat is about. MovNat helps humans reconnect to their instinctual capability through mindful natural movement.

I was moved by the level of passion and effort each candidate brought to the certification. They never let the rain, mud, or cold weather hold them back from giving 100% and encouraging others to do the same. I felt a strong sense of cooperation without a drop of competition. The Team Instructors stepped up to help me with my son so that I could participate more during the certification. It felt like a true community. And what I feel more now than ever is how challenging circumstances can bring people together, regardless of their religion, origin, or gender. 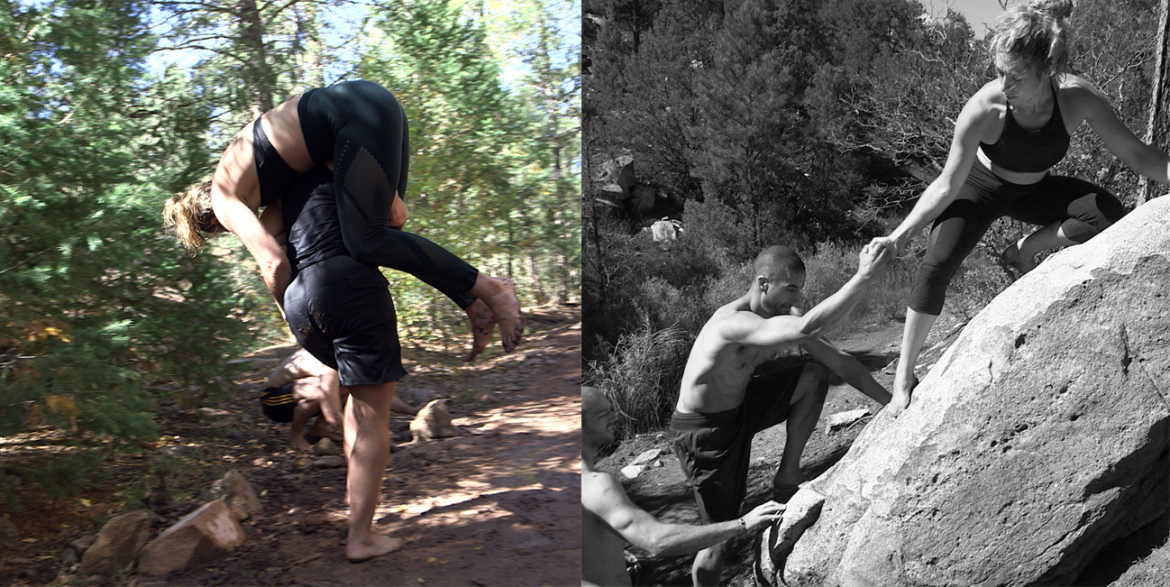 I was also very proud that there were five women this year; four more than last year. These five women showed up willing to step out of their comfort zones and empower themselves through natural movement. They climbed the same trees as the men, jumped across the same rocks, balanced on the same rails, and ran the same trails. They moved with grace and humility. When they fell, they’d get right back up and try again. It was an honor to witness their physical and mental journey of the 3 days.

In summary, I walked away feeling hope for our younger generations, the reclamation of our humanity, and our respect for Mother Earth. Not only were these people developing self confidence in their physical ability, they were deepening their purpose for their physicality…actively tapping into something greater than themselves. Words like community, togetherness, inclusivity, and helpful came to mind. And this is exactly why I teach MovNat.

MovNat level 3 isn’t only about higher level skills. It’s connecting to a deeper purpose for movement that goes beyond one’s self – with mastery of the self as an amazing byproduct of the process of mastering our environment. Natural movement becomes the powerful impetus that ultimately drives transcendence of the self and ever expands our ability to interact with nature, each other, and our own true essence.