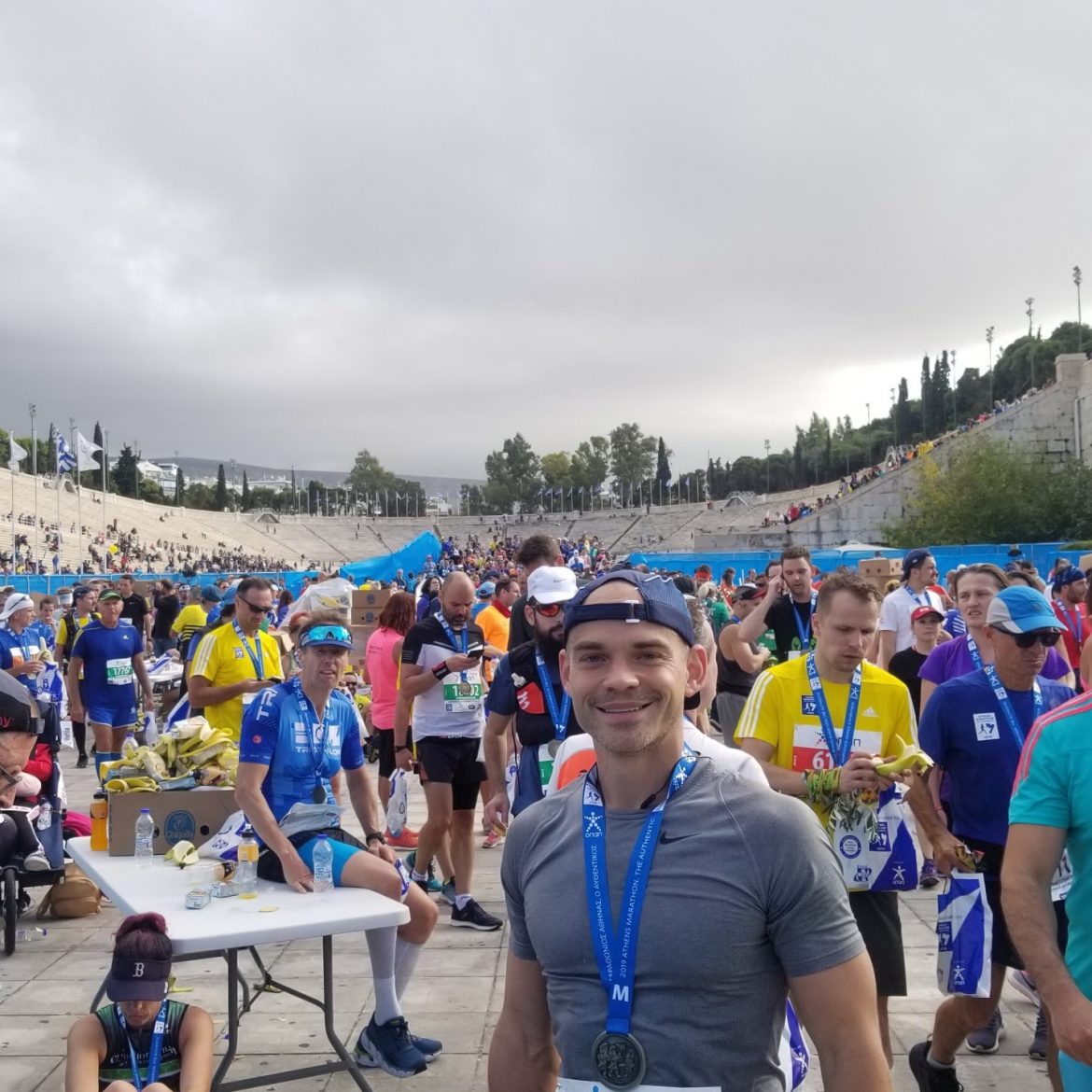 As the bus wound down the steep hills to the starting line of the Athens Classic Marathon, I thought this is crazy. I tried to imagine the run back up to Athens. From mile six to mile nineteen, there would be a one thousand foot climb. It is possibly the most difficult climb of any major marathon. Looking down at my Vibram Fivefingers, I could not help thinking about how unlikely this situation really was.

I have struggled my entire life to be a runner. In college, I tried to pick up running. Plagued with knee and hip pain, I visited a podiatrist. He pointed out that I walked and ran like a duck. In fact, it looked like my feet were trying to run away from each other.

He said I needed motion controlling shoes and custom inserts. Apparently, running with your toes pointed out tends to trash your knees, ankles and hips. The shoes would not teach me to run with neutral feet, but they would help my body tolerate the destructive duck-run. I gave the shoes a shot, but eventually decided that running was not for me. I started wearing the thick motion-controlling shoes everywhere, and I even became the guy who wears thick running shoes at the beach.

In 2013, I read Born to Run. It resonated. I remember lacing up my first pair of minimalist shoes and heading out the door.

It was a total disaster. Humans who run like ducks should not run barefoot. I could barely walk for a week. I never wore those shoes again. Instead, I spent the next four years building my barefoot walk.

When you spend your entire life in shoes, your body adapts and even atrophies in bizarre ways. My brother-in-law, who is a chiropractor, pointed out that my VMO, the teardrop shaped muscle above my knee, had atrophied. Even while flexing, the VMO on my right leg was not visible. My stabilizing muscles were a joke. He asked me to balance on one foot. I could not do it for more than a few moments.

I discovered Katy Bowman and began building a foundation. I bought a pair of Correct Toes to build my toe splay. I slowly worked my way down to Nike Frees and then to fully minimalist shoes. I went for long walks and hikes completely barefoot. I stretched and strengthened my calves. I practiced my deep squat. As I strengthened my arches, my feet shrank. I even started buying shoes half a size smaller.

I bought a spiky massage ball for my sore feet. It was a slow, frustrating process. But after four years, I could comfortably walk all day, every day either barefoot or in minimalist shoes. I threw away all my old shoes.

Back in Greece, the bus arrived in Marathon. Eighteen thousand participants loitered around, stretched and took pictures. The Authentic Marathon traces the route ran by Pheidippides in 490 BC. Pheidippides was a hemerodrome or day-runner. In antiquity, day-runners were the postal service. They ran incredible distances to deliver messages.

As the legend goes, Pheidippides ran the 26.2 miles from the battle of Marathon to the city of Athens, to proclaim the Greek victory over the Persians. He announced the victory with his last breath and then fell dead. The legend is the basis for the modern marathon.

The race started at 9:00 am with a massive downpour of rain. As a newbie, I stood several corrals back and had to wait my turn. Music blasted over enormous speakers. It felt like a music festival.

Twenty-six minutes later, it was my corral’s turn. I crossed the starting line at a trot and clicked on my running watch. Reflexively, I ran through my mental checklist: tall spine, quick cadence, neutral feet, slight forward lean and a light forefoot strike. It was all there.

Ok, now I just need to relax and melt away any excess tension, I thought. I felt good. I had come a long way in twenty-two months. 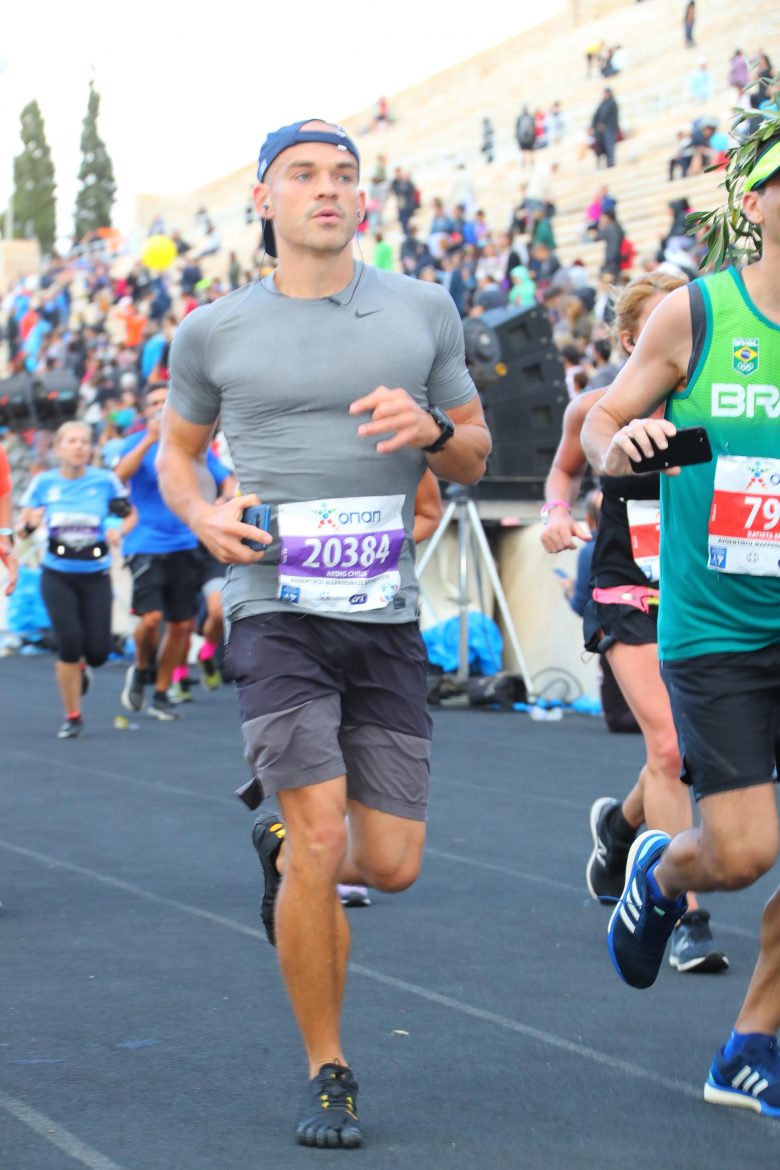 I started barefoot running when I started MovNat. In 2018, I signed up for the Level 1 and Level 2 certifications and began online coaching with Team Instructor, Bernd Reicheneder. He helped me throughout 2018 to improve my running form. I also had my run evaluated by Danny Clark at my L2 and again by Erwan Le Corre at my L3. In the year that separated my L3 certification and Athens, I continued to learn, practice, and read everything I could. These three lessons stand out above all the others.

Barefoot running elicits the same running form commonly attributed to elite runners. It often leads to shorter steps, a forefoot or midfoot strike, a higher stride rate, and reduced ground reaction forces. The result is a more efficient run with lower impact forces on your joints.

In my experience, barefoot running is not equally natural for everyone. Some people slip off their shoes, head out the door, and simply begin running. Their body finds the right form naturally.

For others, the transition can be a struggle. This is because; the more you have trashed your body through neglect and misuse, the more challenging the return to a natural gait. My three-year-old daughter can cruise barefoot, no problem. I, on the other hand, had to earn it.

MovNat has a ton of outstanding running drills and cues. With them, I developed a feel for natural running. I made progress. To correct my duck-run, I needed to rotate my hips. It took a lot of practice, and whenever I got tired or lost focus, I would slip back into my duck-run. I became obsessed with my form. From the beginning to the end of every run, I concentrated on my running form and technique.

When you first start running or make a big change in your form, you use way more muscle than needed. In fact, you activate both agonist and antagonist muscles. Consequently, with each step you take, you have some muscles working for you but others working against you. With practice, you become efficient and relaxed. Your body naturally learns to eliminate all the excess tension. You can think of this as the efficiency that comes from unconscious competence.

Normally, this is not important. In fact, the less you think about it the better. However, as I ran, my attention was fixated on my form. That attention was correcting my out toeing, but it was also creating heaps of tension. All that tension was wreaking havoc on my calves, Achilles and feet, and it was making me a very inefficient runner.

To combat this, I developed a new technique. I would check in on my running form, because that was still a work in progress, but after checking in, I would focus for a few strides on relaxing every muscle. I would bring my attention back out of my running form. At first, it was tough, but the process eventually became a habit.

MovNat provided the foundation upon which I built my barefoot run. It helped me build joint strength and stability, improve my motor control and increase my mobility. It also provided the opportunity to discover gaps in my fitness. I had to work hard on my balancing side shuffle and transitioning from a deep knee bend to a flexed foot kneel, but with practice, they helped me build a lot of strength, mobility, and stability in my feet and ankles. 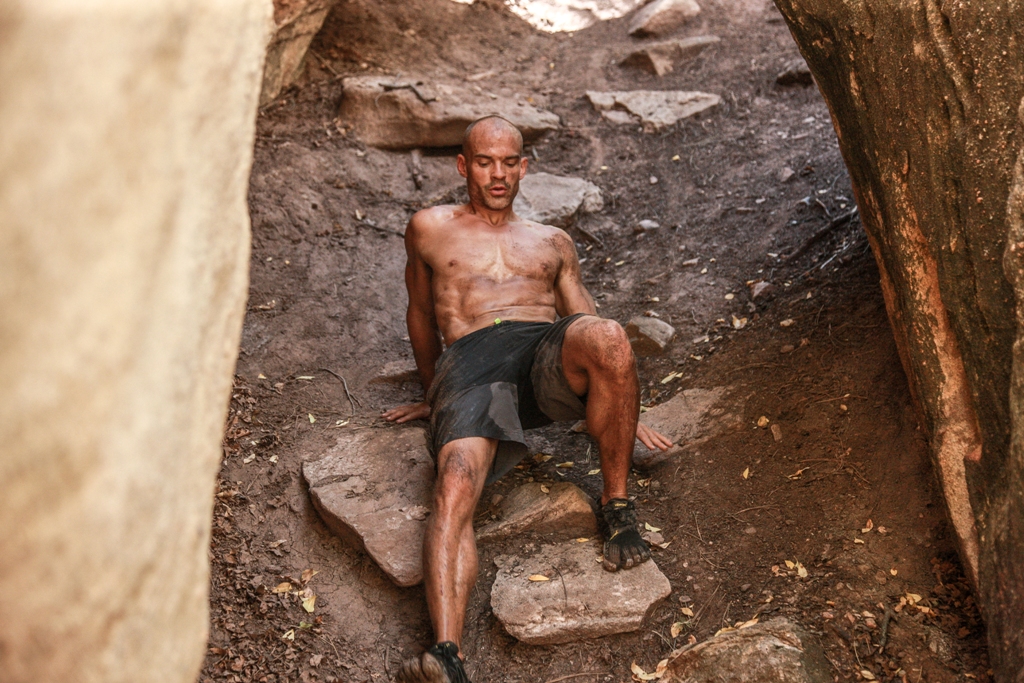 I also noticed that my dead lift was particularly weak. I spent years working on calisthenics and gymnastic strength training, and consequently I neglected my posterior chain. I am sure my weak dead lift was directly related to my hip rotation troubles.

After eight months of MovNat, I could comfortably run on trails and roads completely barefoot. I kept running, until one day a friend invited me to run the Authentic Marathon. My longest run at that point was only seven miles, but I had six months to train. I went all in.

Back in Athens, the sign read 250 meters left. The news hit me like a shot of tequila. I charged towards the finish. The road sloped gently downhill and around a corner. I felt better than I had for many miles. The long hard climb was behind me. As I rounded the corner, the Panathenaic Stadium came into view. Built in 144 A.D. and made completely out of marble, the stadium is breathtaking. It must be one of the best marathon finishes.

I could no longer feel my aching knee or tender feet. It was nothing but surreal, positive emotion. I crossed the finish line and walked the long, slow lap back out of the stadium.

I took it all in from broken to Athens, and I knew one thing for certain. It was worth it. 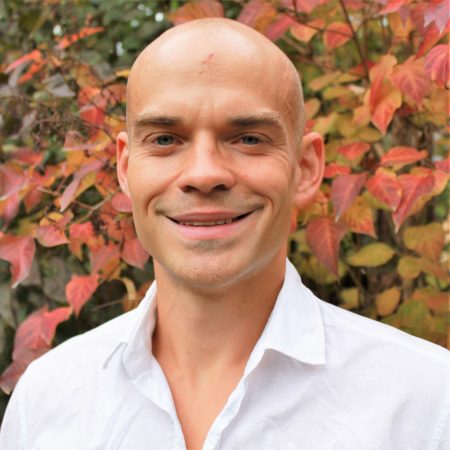 Chris Redig is a coach and nutritionist. He helps clients look, move and feel their best by optimizing their nutrition, training and lifestyle. He is a MovNat Master Trainer and a Henselmans Certified Personal Trainer. In particular, he loves to help adventure-enthusiasts build ready-for-anything minds and bodies. He currently lives in Denmark with his wife and two kids. You can connect with him at Adventure Driven Fitness, Facebook or Instagram.