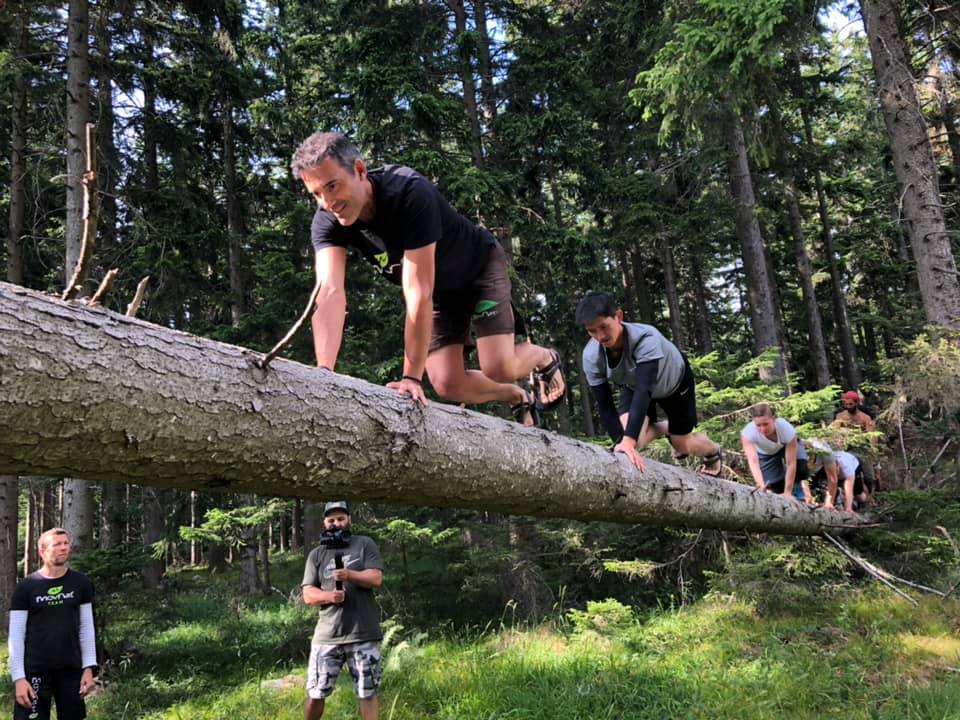 With only two weeks to go before Europe’s very first Movnat Level 3 Certification, I was keen to be as ready as possible. A few days earlier, I had dramatically thrown off my shoes at the end of a sports lesson before launching into a barefoot sprint up the hill. It didn’t take the school kids long to catch on. For a second, they watched their headmaster with some bemusement; and then something primal and quite natural kicked in, and they followed after me with wild cries of excitement, pulling off their own footwear as they charged forward in pursuit. It was a great feeling: The wind rushing against our faces, gravity pulling us forwards and the ground escaping under our bare feet. We raced forwards leaving their other teachers behind us, laughing and panting as we made it to the top of the hill.

But I was beginning to enjoy barefoot running a bit too much. It had been a long day at work and conscious of the upcoming L3, I went into my garden hoping to work on barefoot running with some sprints. Having neglected to check my surroundings, my foot landed on a large coach screw sticking out from a wooden panel hidden under the grass. As blood poured from my foot it seemed like my L3 plans were over before they had begun. 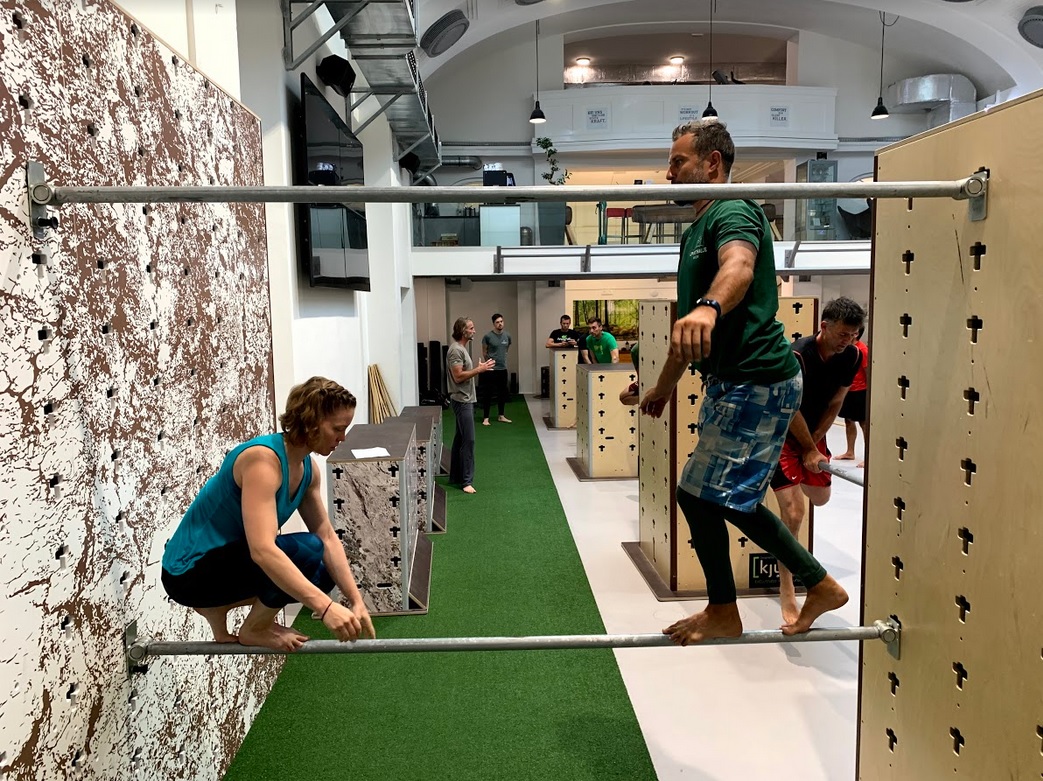 The screw had gone in fairly deep, and although I managed to remove it, the blood didn’t stop as easily. A few hours later, the whole foot was swelling up and I was losing mobility in my ankle. I could no longer place any weight on my foot. It looked bad. My wife suggested I get it checked out. Later that night, a doctor confirmed that it would be a couple of weeks before I could bear any weight on it. I was sent home from the hospital with crutches under my arms and the doctor’s parting advice echoing in my head: “I don’t think you’ll be able to go on your ‘outdoor’ trip to Austria.” 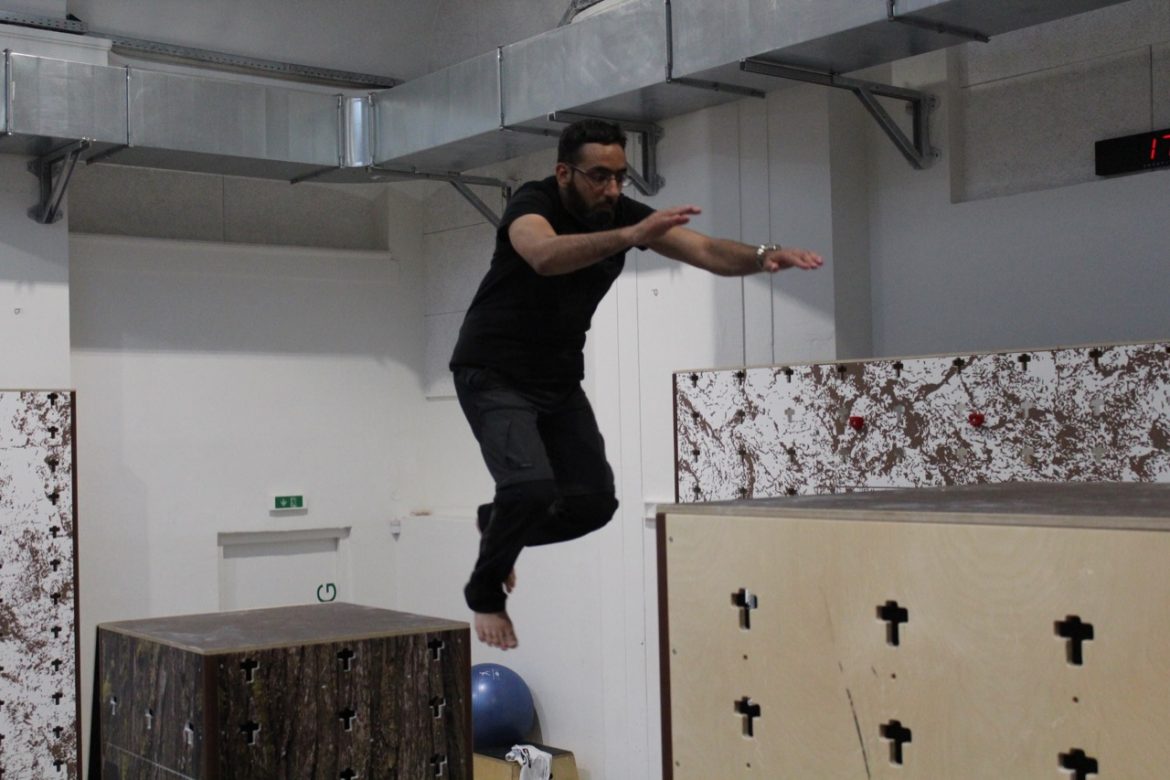 I woke up the next morning firmly resolved to free myself of the crutches. All I had to do was apply my MovNat knowledge to myself using regressions and progressions, tinkering with volume, intensity and complexity and being mindful of what my body was telling me. I would be my own client. And the learning experience, I decided, would make me a better MovNat coach. At the end of the first day, I was able to get by with just one crutch. By the end of the second day, I was progressively bearing weight on my injured foot. Come day three, and I was able to return to work with just a slight limp. 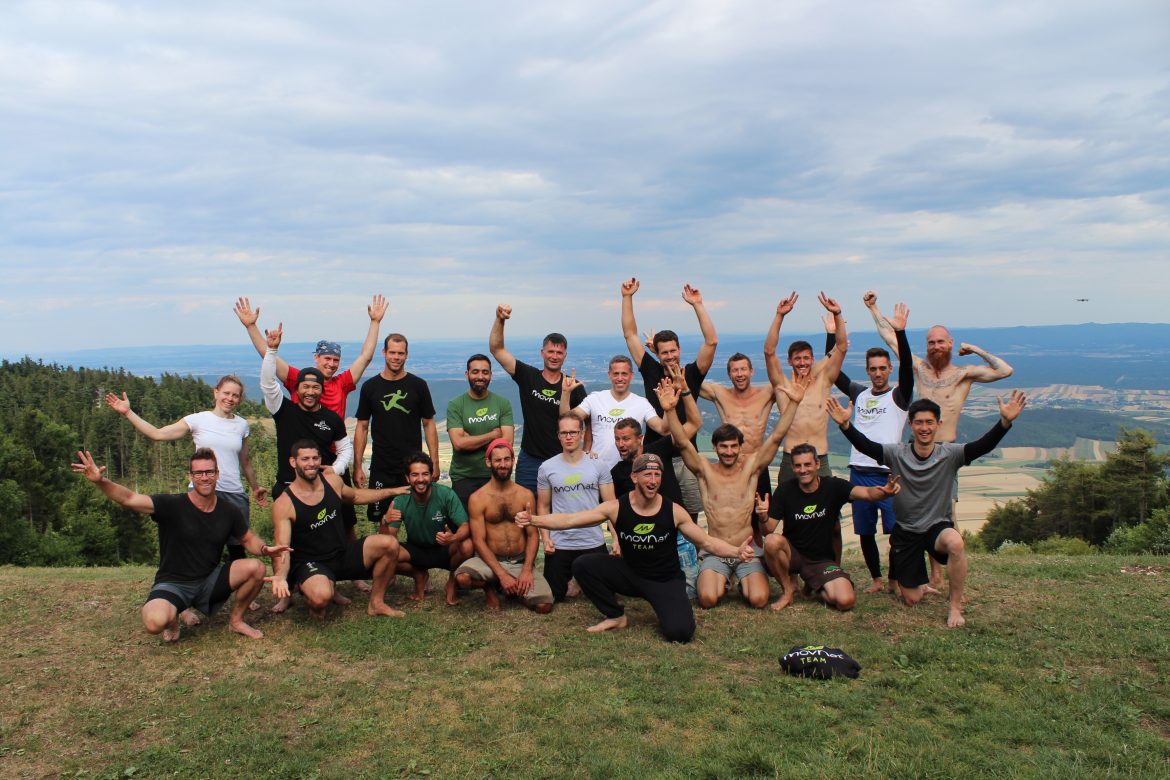 About a week later, I found myself sitting with twenty or so other people on the top of a mountain in the Austrian Alps. The landscape around us was stunningly beautiful. Far below the hills, we could make out tiny houses and farmyards. Occasionally we would see climbers making their way slowly and deliberately up the side of a cliff face, and here and there, deer hopping gracefully about the rolling hillsides. Over the next few days, we would allow ourselves to be swallowed up by this landscape as we explored purposeful human movement in the complex environment of the untamed outdoors. Consciously, or otherwise, we would experience the immensity of nature and the surprising versatility of our human bodies (and minds) to move through it for our own purposes. 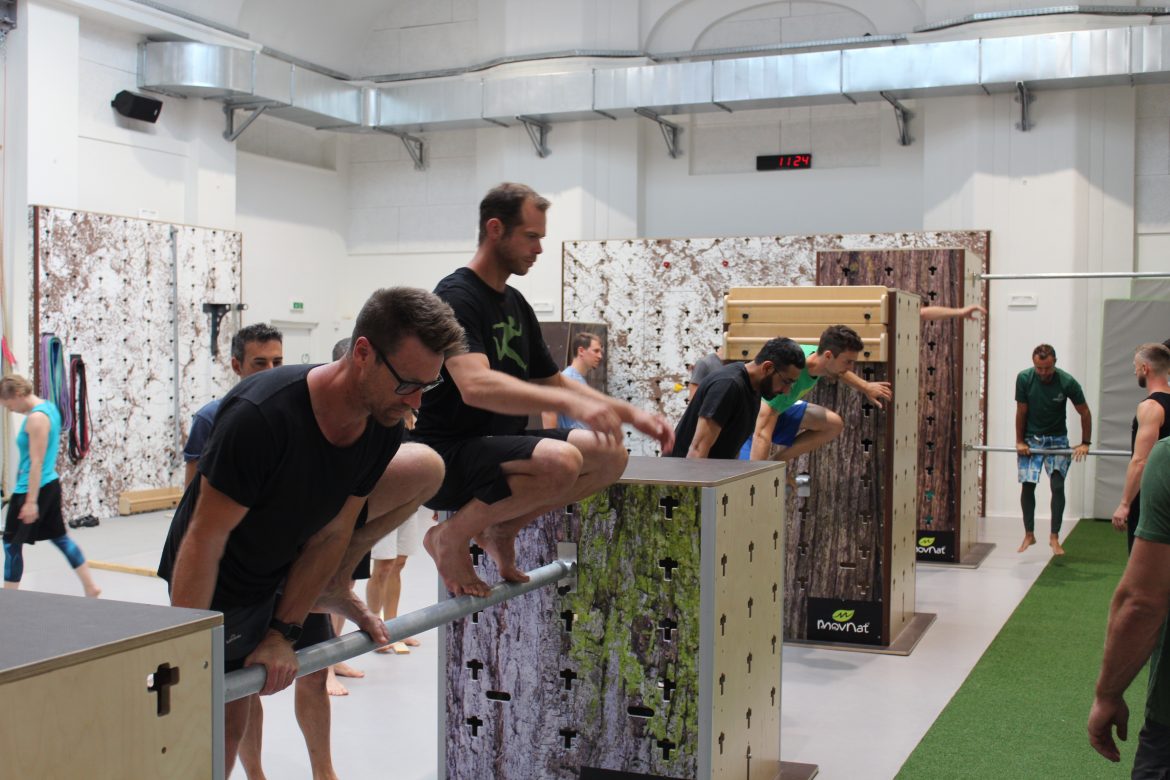 We explored these abilities slowly at first. Sitting together under the sun, sharing our backgrounds—how we discovered MovNat, talking about our motivations, our aspirations and even our fears. Although we were nominally strangers still, it was clear that we were all kindred spirits, and in many respects, travelers on the same road. Some among us were gym owners. Some were professional coaches who had made a transition from other disciplines. A few of us were martial artists and educators. All of us were teaching Natural Movement practice as Level 2 instructors. And we were all here to continue to improve in our own personal practice and to become better coaches for our clients and communities. Strong friendships would be formed over the next few days as we challenged ourselves, encouraged each other and moved together with this common purpose and noble intention. 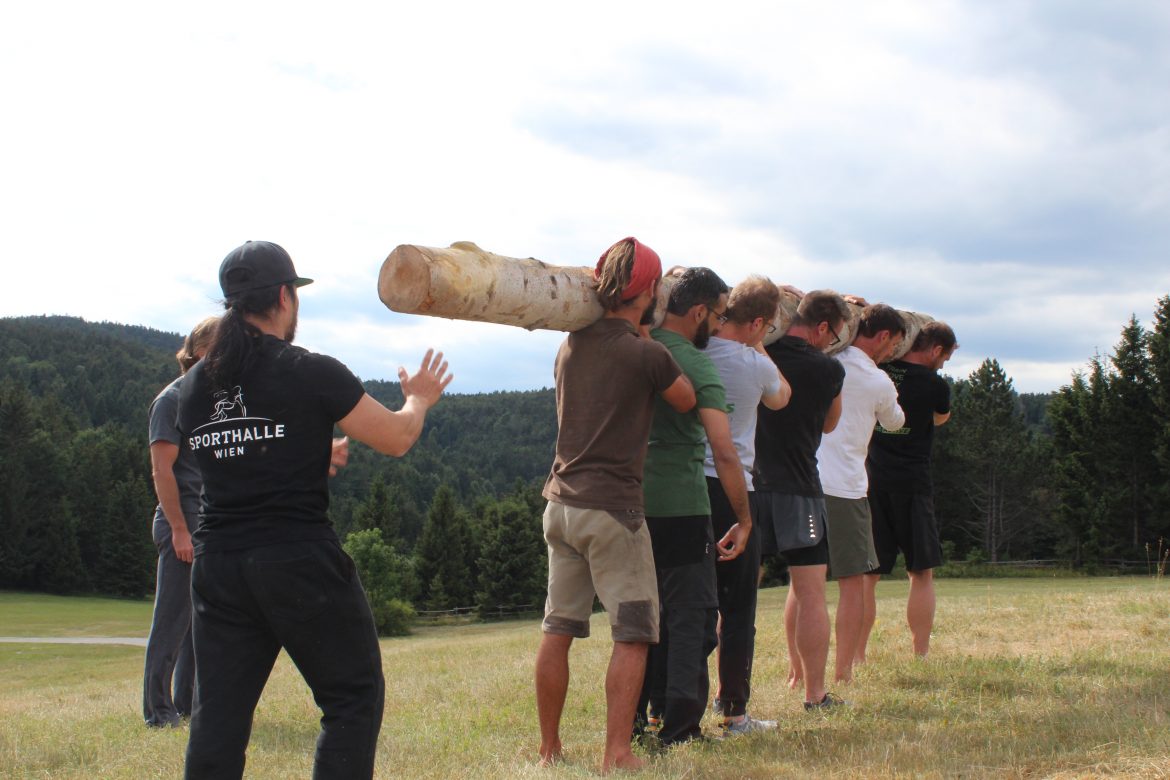 And as the day moved on, the intensity picked up. We had expressed our intentions in words and thoughts. It was now time to realize those aspirations in movement. Our instructors observed us closely, assessing our L1 and L2 skills as well as coaching us through some of the more advanced skills of an L3. 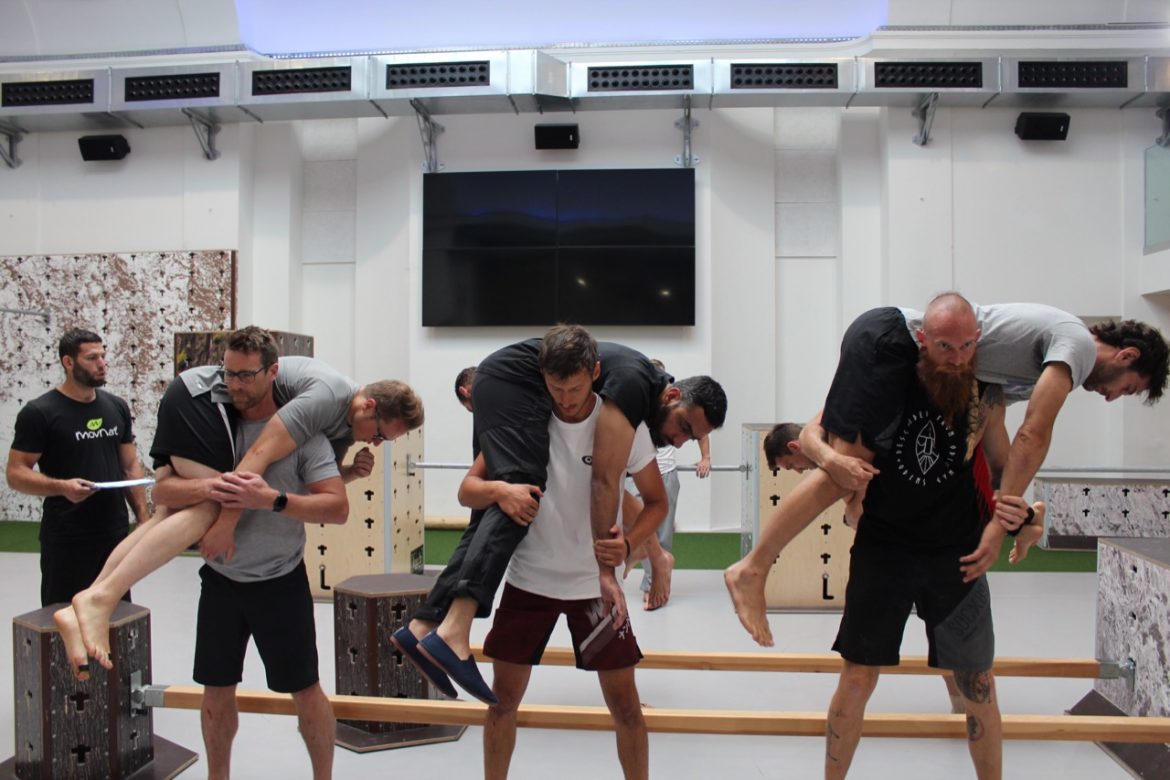 And then the remaining days followed in quick succession: out in the woods, moving silently and swiftly over, under, around and up. Our only instructions: move quietly, move swiftly, stay away from the path. Let the natural landscape around you be your guide and adapt your movement skills to the unpredictable terrain. At times we were running or scrambling down the steep sides of a mountain with the rocks and stones giving way under us. And at other times we were jumping, leaping, diving, rolling, lifting, throwing, catching, climbing, scrambling—under forest trees, under the bright sun, up steep, muddy inclines, along a stream, besides a waterfall. 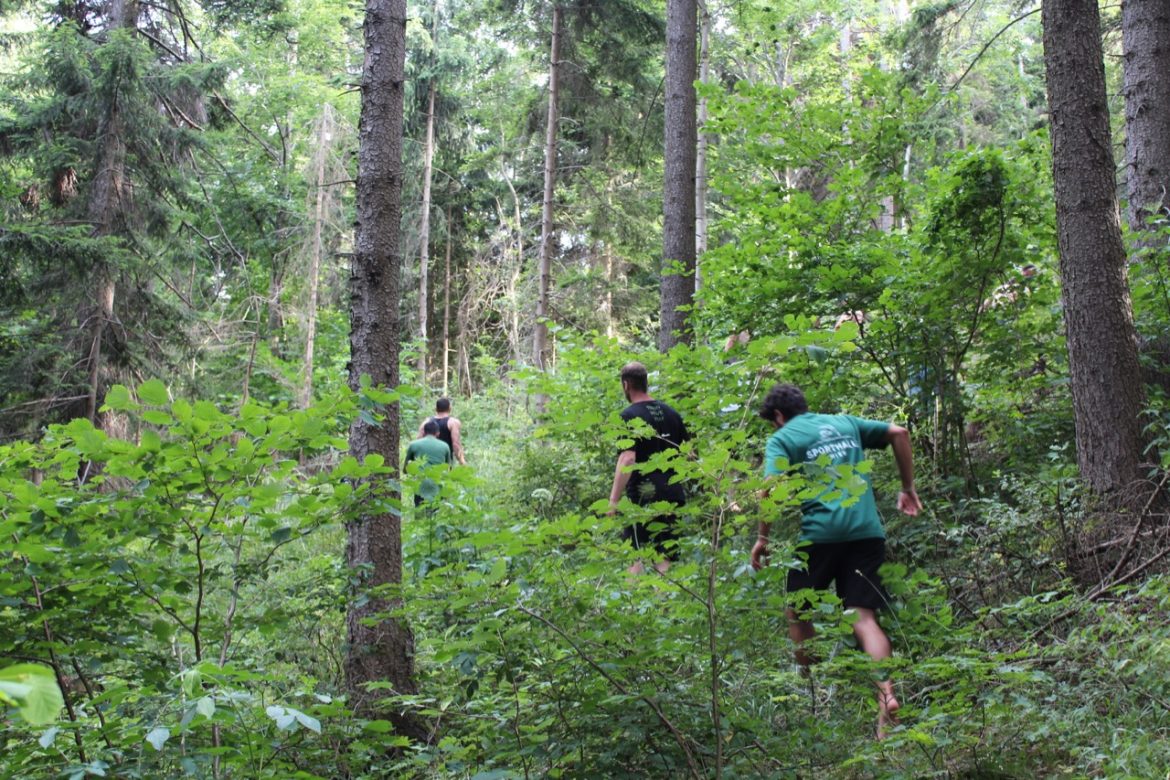 When things became challenging, and it seemed like we were being asked to do the impossible, Erwan would address us altogether. His sharp words made softer only by his French accent, calling us to change our mindsets and to reevaluate our intentions. This call to mindfulness would then be followed by some technical advice and observations honed from all the years of his own personal practice. 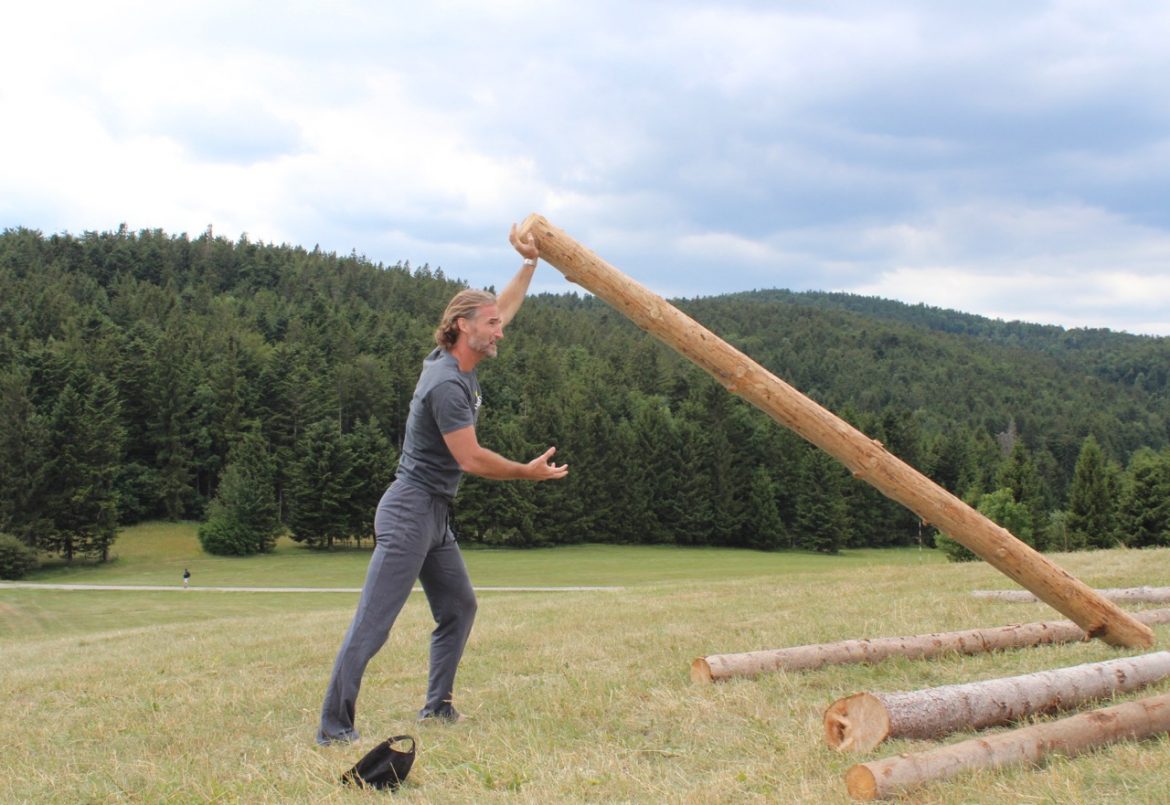 At moments like this I would be reminded of the words of the famous Japanese swordsman Musashi Miyamoto: shi wa hari, deshi wa ito nari—‘the teacher is like a needle, the student like thread’. And I would see a change come over the group. And then the impossible was no more. We could move and achieve levels of personal accomplishment greater than we had imagined. I think each one of us experienced moments like this—and we congratulated each other and laughed together whenever it happened. 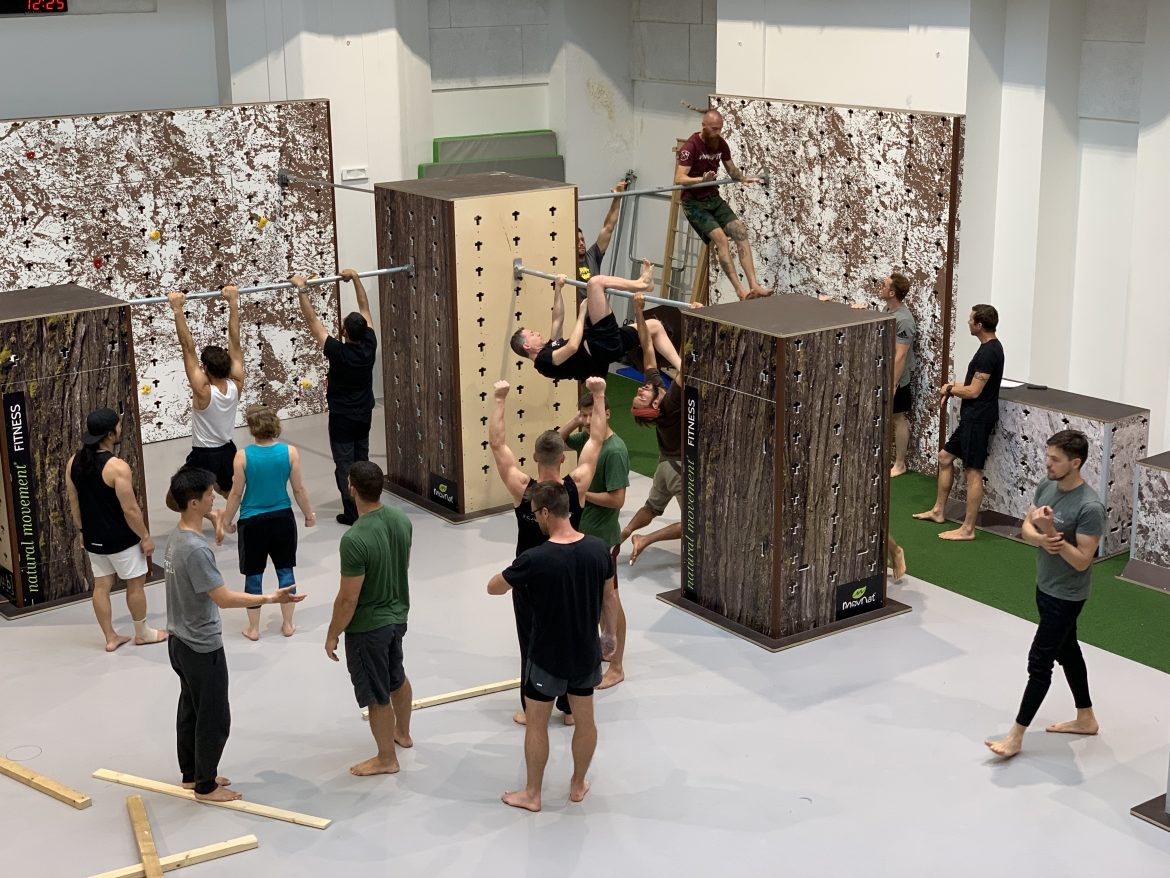 Not all of the time was spent outdoors. For some of the technical training and testing we were at Sporthalle Wien, Vienna’s very own MovNat facility. This beautiful, bespoke training space felt in many ways like being at home. Like the facility itself, the quality of coaching and instruction we received was also second to none. All of our instructors had of course, at some time or other, gone through their own Level 3 certification and so could relate to what we were going through. All of them are skilled athletes with high levels of Natural Movement ability. But each one of them also contributed their unique teaching style to make our learning better: Danny’s keen observations, Bernd’s precise breakdowns of regressions and progressions, and Jerome’s genuine concern and timely encouragement all contributed to our personal improvement and growth. For this, and the many other things, I am so grateful to each one of our coaches. I am sure all of my fellow L3’s share the same sentiment. 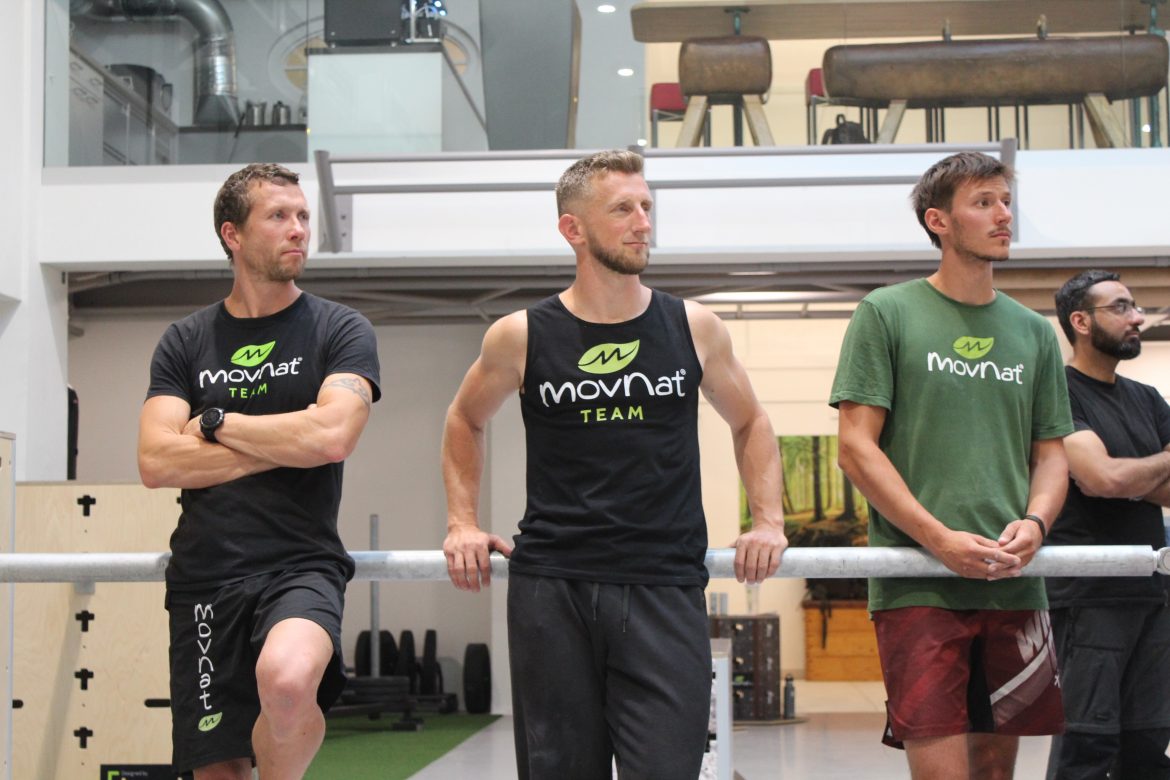 The best thing about MovNat is its people. In every certification I have attended, including the Combatives Certification in Mexico, I have had the privilege and joy to train and work with people that genuinely care about each other. The L3 was no exception. We were a large group, at least twenty strong, from all over Europe and even further afield. We struggled together, we laughed together, we ate and lodged together; we joked together and teased each other, we commiserated each other and encouraged each other—and we celebrated and grew together. It was not always plain sailing. There were challenging times and on occasions we suffered injuries together and probably cried silently together, too. But in doing all these things we forged experiences, memories, and friendships that will last a lifetime, and for which I am grateful to each one of my fellow L3’s.

We were also a courageous group, leaving our comfort zones to challenge ourselves in unfamiliar ways among unfamiliar people, and exposing ourselves to the possibility of failure. I would be remiss not to mention Kathi here. She was the most courageous—the only woman in our group and easily one of the strongest and skilled among us. 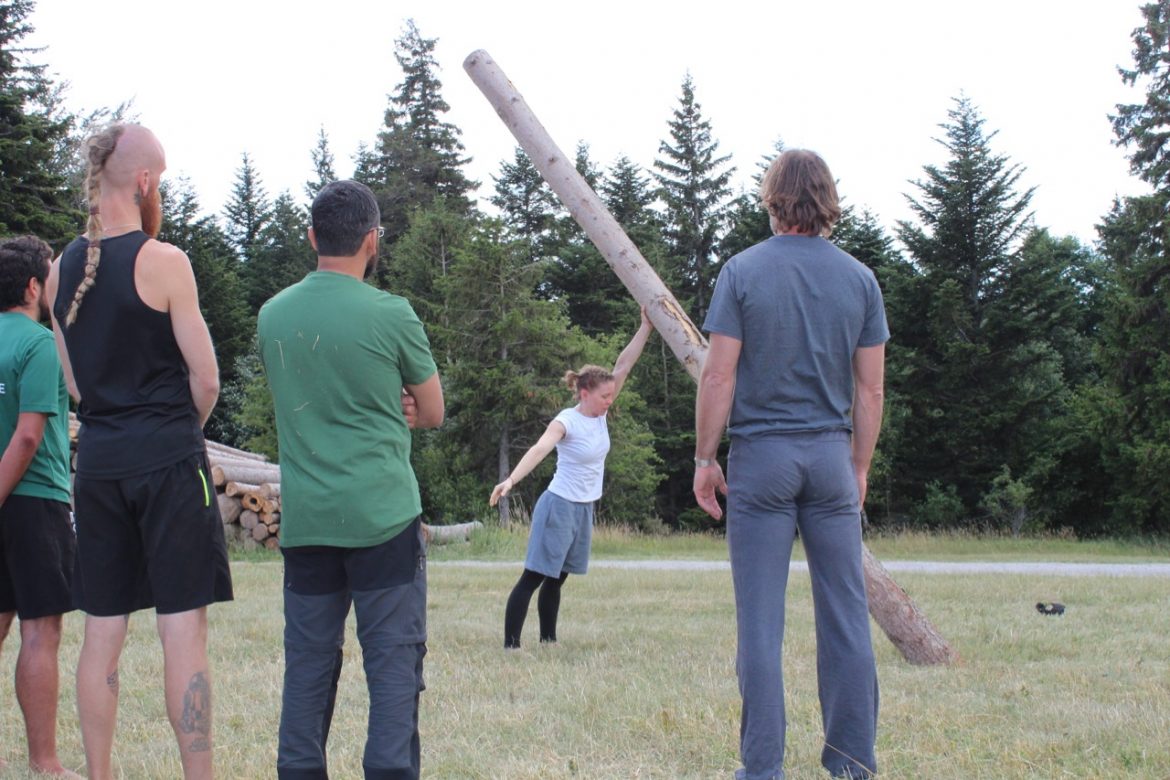 It is comforting to know that there are people of courage still left in our world that are willing to grow through baptisms of fire. We all have our own demons to confront. As modern people from parts of the world where we are privileged to enjoy a relatively comfortable lifestyle, it is necessary for us to ‘return to nature’ and understand how we have been gifted as human beings with an extraordinary planet to enjoy, protect, respect and be grateful for. 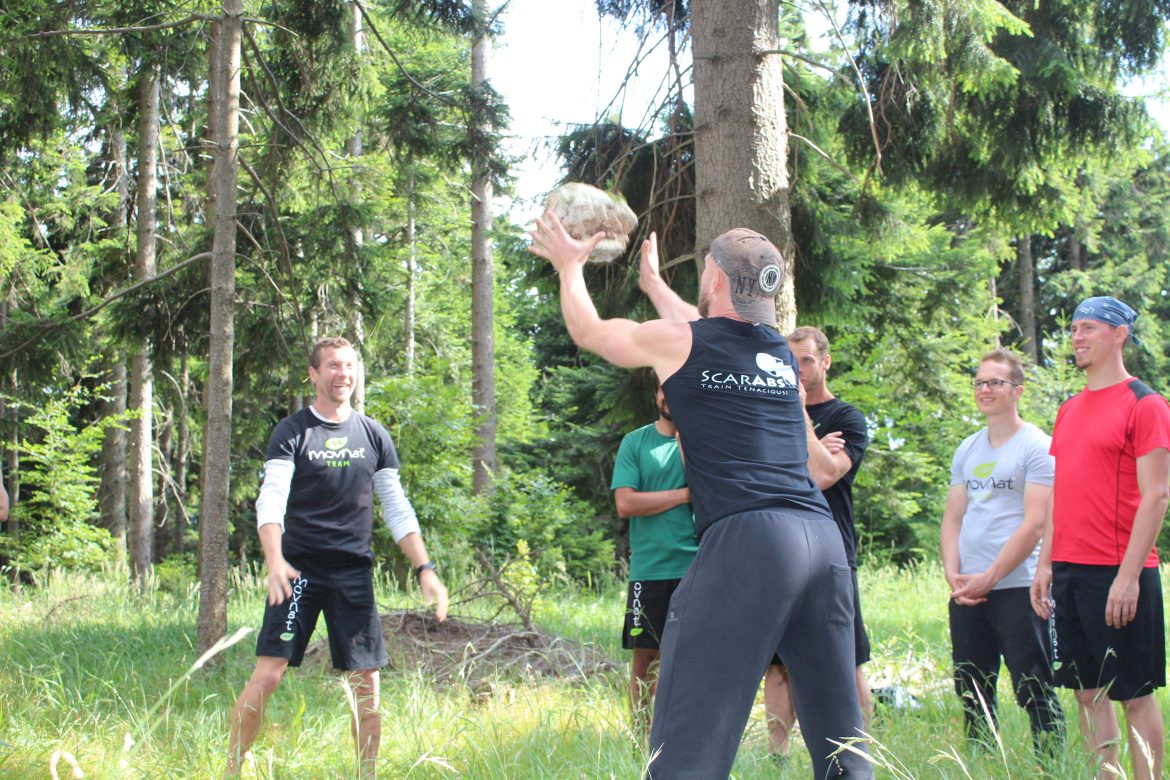 Towards the end of the final day outdoors—as we stood beside a small waterfall—Erwan instructed the group to plunge into the water. He led the way, stripping off his shirt and carefully stepping on to the uneven and treacherous ground below. One false step, one mindless moment, one misplaced foot would spell disaster, he warned us.

After a series of other grueling tests of mental fortitude and movement efficiency, he scrambled up the side of a steep, muddy bank and encouraged us to follow in pursuit. And I was reminded then of how a few weeks earlier, I had thrown off my shoes in front of the school children in my care, and sprinted off up the hill—in order to keep them connected to a part of their childhood that threatened to slip away from them as they grew older. In the same way, I realized, Erwan was goading us on—except that we were not school children. We were adults for whom all this had become a genetic memory in the dim past of our ancient ancestors. Movement for them, in their world, was a necessity of life. Movement for us, in our world, is necessary for quality of life.

“Your ancestors would be proud of you,” he proclaimed. And we knew he was right.

Master level. For the passionate. For the committed. 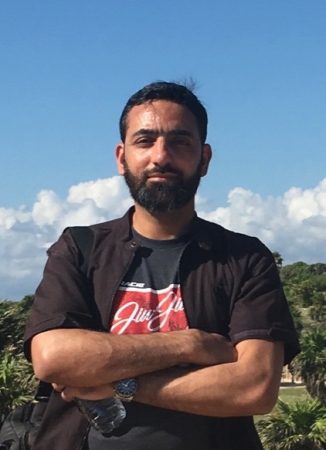 Munawar Karim is a MovNat instructor with over three decades of martial arts experience. He holds an L.L.B in Law & Japanese as well as a postgraduate degree in Modern History. He lived and worked in Japan for several years using the opportunity to study Shorinji Kempo, and deepen his understanding of spiritual teachings within the ninjutsu, samurai and sufi traditions. On returning from Japan, he studied Shaolin Kung Fu, and then took up the study of Wing Chun Kung Fu, and finally Brazilian Jiu Jitsu.

About ten years ago, Munawar made the decision to leave his position as a corporate lawyer and pursue his interests in the development of mind, body and spirit. His book on the history of African slaves in antebellum America is due to be published this year. He is founder and headmaster of a Montessori Primary and Liberal Arts secondary school. Munawar teaches MovNat, MovNat Combatives and martial arts at Deenway Dojo in Reading, Berkshire (United Kingdom).